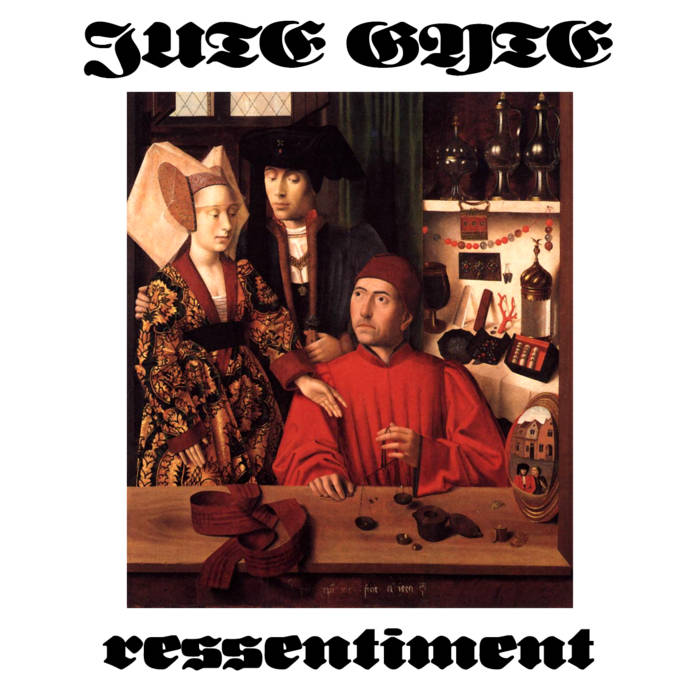 Metallurgical Fire This is the logical conclusion of extreme metal, along with the other black metal albums from this project. I can’t get into some dissonant bands that other people like because they’re aren’t weird enough or straightforward enough. It either has to be recognizable or completely insane for me to like it. Jute Gyte will make you think you are losing your mind. This is not a musical safe space. If your mental health is severely in question then either stay away or use JG as cathartic therapy. Favorite track: Like the Deepening of Frost in the Slow Night.

cypop A scholar approach to the genre, done by a true aesthete. Pure dissonant poetry. One of my favorite BM album. Favorite track: The Grey King.

Atmospheric Black Metal Cat Jute Gyte is an acquired taste.. one that most will never acquire. But man , for those who do ? Oh wow. Favorite track: The Grey King.
more...

Notes:
"The Central Fires of Secret Memory" is the most contrapuntally complex track in this trilogy of albums and strikes me as a precursor to the pervasive imitative polyphony of Ship of Theseus. "Central Fires" begins and ends with four-voice canons using the same material, with voices entering in the same order but separated by different time intervals.

"O Soft Embalmer of the Still Midnight" is a line from Keats. "The Central Fires of Secret Memory" is a line from Ivor Gurney. "Like the Deepening of Frost in the Slow Night" is a line from Laurence Binyon. Reading wartime poets and contemplating the deaths of Edward Thomas and Alun Lewis provided the inspiration for "Your Blood and Soil Are Piss and Shit", but I would like to take this space to suggest that, per Voltaire, we are all insects devouring one another on an atom of mud, and, per Augustine, inter urinas et faeces nascimur.

"Jute Gyte is more like the work of a forgotten master, hanging in the corner of the gallery where most with only a superficial interest in the museum can just ignore it. Sort of like the classics he mines to represent the face of the music. You might also think of this as an Erich Zann transcribed into our shared, non-fictional universe (I know, that's a bold assumption on my part)... On a base level, Ressentiment is resplendent ugliness set to gnarled, visually stimulating poetry, but the twisted mind can invert it right side up to something of both abstract melancholy and fractured beauty, reactions constantly being generated for me throughout the six tracks and 56 minutes of unhinged escape... Jute Gyte remains one of our most creative and challenging American black metal extracts." - From the Dust Returned

"Ressentiment is a study in microtonal shredding and odd doomy turns. When he goes into hyperblast, it’s an industrial nightmare not too far off from Blut Aus Nord. In a way, Jute Gyte fits with the individualism that defines some of the bigger names in USBM, but Kalmbach is in a class of his own. What better way to knock the wind out of a armchair nationalist than the ending lines of "Your Blood and Soil Are Piss and Shit"? 'Where is it now, the glory and the dream?/Your blood and soil are piss and shit/Your honor and glory vanity’s refuse.' Thank Satan a dude like this puts his stuff on Bandcamp, else tracking down his limited releases would be a descent into Discogs torture." - Pitchfork

"Jute Gyte has always left me feeling quite bleak about things; it simply does not let you draw any other conclusions... Jute Gyte is music stripped of typical listenability, leaving only the raw guts (from which we largely shy away) to inhabit the entirety of its space. This is truly otherworldly music, as caustic as it comes, and twice as vitriolic as what you’re probably listening to. Ressentiment exudes an aura of horror that burrows deep, transmitting its unsettling nature into your mind with the efficiency of a sickening virus intent on poisoning you to death." - No Clean Singing

"Ressentiment works, ultimately, as one of those rare albums that begins with a bang and manages to sustain its initial momentum all the way to the end with nary a misstep to be found. Though not a “pretty” or “pleasant” album by any means, Kalmbach’s genuinely alien approach to harmony and composition coupled with a greater emotional weight than much of his previous work makes Ressentiment one of his best albums yet, and one of the best this year." - Toilet ov Hell

"It's maddeningly off kilter, to untrained ears (and likely some trained ones too), it sounds out of tune, or more accurately, like it's constantly changing tuning, the first flurry finds the band seemingly slowing down, when in reality, the pitch/melody are in flux, making the whole thing sound like it's melting, it's woozy and warped and seriously WTF,,, It definitely takes some getting used to, but for folks into damaged outsider heaviness, this will totally push all your WTF buttons. Otherwise, JG deliver some seriously orthodox black buzz, it's just that the black buzz here is so bizarrely tuned it sometimes makes stuff like Deathspell Omega and Blut Aus Nord sound like AC/DC... Heavy and damaged, tripped out, fucked up, psychedelic and extremely experimental black metal that will likely have you scratching your head while banging it like crazy. Awesome!" - Aquarius Records