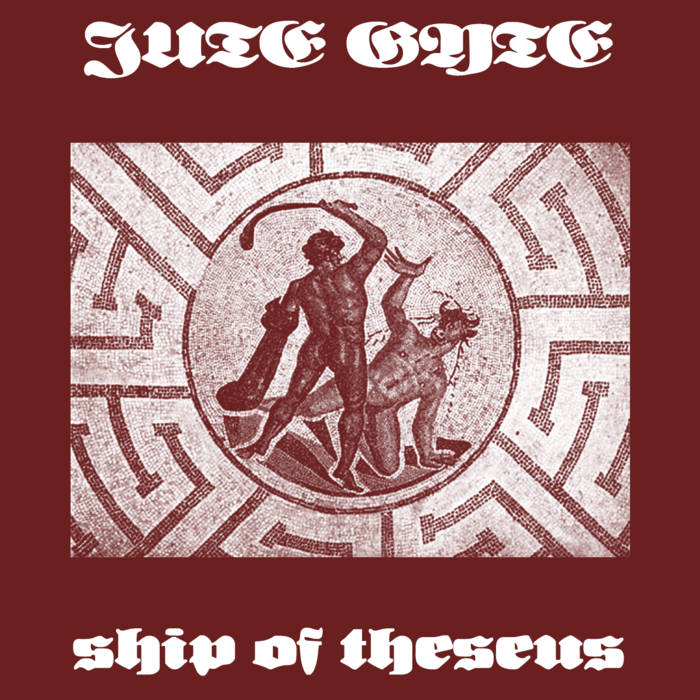 Metallurgical Fire I’ve described Jute Gyte as terrifying and extremely disturbing, even nausea inducing. Even when you start to “get it” you are confronted by anxiety producing chaos. However, Ship of Theseus is the only album that I would say should be used to score horror films.
more...

Notes:
Elaborating on the themes of continuity of consciousness, identity and change, there is a lot of imitative polyphony on this album. The title track opens with a two-voice canon (A), followed by a riff derived from that canon, itself joined halfway through by a second guitar in an inversion canon. After this riff, a new two-voice canon (B) appears which is joined at its midpoint by a return of the first canon, creating a four-voice double canon. The inversion canon riff recurs, followed by another inversion canon riff, derived from canon B, that ends the track,. "Grief of New Desire" opens with a four-voice, four-note canon. The note sequence D-half flat, C-half sharp, D flat, C natural is repeated on four guitars, each in a different octave, each starting on a different note in the sequence. Because all four pitches are in constant circulation the effect is harmonic stasis, though the shifting registers create an illusion of cyclical movement like a sound-object being rotated. The slow riff which follows becomes a canon. "Lugubrious Games (Sans Frontières)" opens with a canon backed by delayed (hence canonic) drums; "Machinery That Renders Debt Infinite" includes inversion canons.

The closing line of "Lugubrious Games", "the word always dies where the claim of some reality is total", is from Jean Amery's At the Mind's Limits, as are several other lines used in this album's lyrics. Much of the title track's lyric is drawn from Lucretius. The title "Pain and Wrath Are the Singers" is drawn from Robinson Jeffer's translation of Medea; that song's line "aimless years from nothingness to nothingness again " comes from Lovecraft. The wordplay "the afternoon's meshes" is D.F. Wallace's.

"Ship of Theseus’s lumbering compositions are calculated and ponderous, taking time away from their polyrhythmic antagonism to sojourn into prickly clean guitar passages and unsettling intervals of noise and samples.... Much like abstract art, Ship of Theseus is devoid of many of the things we normally find pleasurable in music, yet still might manage to generate significance and potentially even beauty for (some of) those who take the time to parse its inaccessible facade. I’m positive that I don’t understand much of what Kalmbach is doing here, and calling Jute Gyte “difficult to listen to” is putting it rather lightly (this stuff makes Paracletus sound like Sunbather, and this record is actually on the “mellower” side for Kalmbach), but Ship of Theseus is an inarguably impressive work in its vision, organization and execution." - Metalsucks.net

"Completely inhuman, microtonal black metal executed with machine-like precision and an extremely deep knowledge of 20th century/modern classical composition techniques. To put it in laymen’s terms, this sounds like an alien, spectral ship melting into a sea of disembodied, amorphous flesh. Try and wrap your head around this – it will take a bit." - Invisible Oranges

All music, lyrics and design by Adam Kalmbach
Created October 2012 - May 2014